I had been lingering around in one area for almost two weeks, exploring various small rivers and hoping the rain would stay away. But as I was slowly coming to understand, this area receives its fair share of steady downpours, gathered up by the surrounding landscape and prevailing winds. With large parts of the North Island still unexplored, I finally decided to move on again, in search of new and exciting water. And hopefully not so much rain.

It was now mid-February and I had yet to experience great cicada fishing. The large terrestrials had just not been that active in the areas I had fished, probably still burrowing in their underground lairs, waiting for better times. The cicadas can stay underground for up to 17 years, before finally emerging for a period of 6 weeks to do their chirping, mating, flying and maybe crashing on the water to be eaten by trout.

I had planned to fish with some of my local friends, and finally Peter had the opportunity to get away for some fishing on a Saturday. We agreed to meet up very early in the morning, both to get the most out of the day, but also to be first on the river in question. An overnight rainfall had unfortunately flooded the river we wanted to fish, but Peter had another one in mind that drains a different watershed, so we headed there instead. The river was of medium size, with a stony and boulder bottom, surrounded by rich forrest. According to Peter, the river did not have much in the way of aquatic insect life, and terrestrials therefore made up a big part of the trout diet. As Peter put it, “the trout in this river cannot afford not to eat a cicada!”. This sounded good to me, and I tied on a #6 classic cicada fly.

The weather was overcast this day, and since it was still early in the morning, the light was not good and made spotting fish almost impossible. This was not a problem according to Peter, we just had to read the river and fish blind over trouty looking areas, or lies as Peter put it. To fish as much river as possible, we speeded along upstream and targeted only the best-looking lies with our cicada patterns. We didn’t get any responses for quite a while and then we saw the foot-prints. Someone must have been in there in the last couple of days. The river then entered a gorge and some heavy duty climbing and bush bashing was required to get through it. Thankfully the footprints disappeared on the other side and our expectations rose accordingly.

Between the pools and lies, Peter took the lead and raced on upstream. Peter, originally from Scotland, is as fast and nimble as a highland fox. Both his acceleration and top speed is rather impressive, and I often found myself lagging behind, even though I did my best not to. As a working family man with obligations and time constraints, Peter is used to move and fish efficiently, in order to get the most out of his designated fishing time. All I had to do was to try to keep up with the man and take note when he parted some of his wisdom about cicada fly-fishing.

The trout were not in the deeper pools. The first fish we saw was positioned in the faster water just above the pool. Peter almost stepped on the fish, but it didn’t spook. He made his cast and the fish took the fly, but it was one of those damned failed strikes. Either to fast or to slow, nobody will ever know for sure. “Bugger!”, said Peter, before moving on again. We took turns fishing the pools and riffles going upstream, spooking a few on our way. Then we approached a nice-looking pool where Peter said he had caught one before. He fished through the pool, but there was no response to the cicada as it splashed on impact on the water surface. The river made a slight turn just upstream of the pool, gliding across black rocks at medium speed. There was just enough depth there to make Peter a tad excited. I was not that convinced a fish would be there and was about to move on. But Peter made a cast into the current, and suddenly a head appeared out of nowhere and Peter made his strike. This time the fish stuck and ended up in the net. A beautiful brown trout sporting the colors of its native river, just as Peter was sporting his national colors on his kiwi waders.

We proceeded to catch a couple of more fish and also missed some strikes on what looked to be nice fish. We had fished an impressive length of river, but now it was time to head back. It had been an excellent cicada fly-fishing tutorial for me, taught by one of the masters. Now I would spend the next couple of weeks up in the mountains, and cicada patterns would be my fly of choice, starting with the following day.

The weather was beautiful as I made my way up a different river and valley. I didn’t see any fish, but the instructions received the day before from master Peter guided me as I fished the best-looking lies. After some hours I had yet to see anything, but still pressed on further upstream. You can walk for hours not seeing any fish in these rivers, but suddenly you see one and have the chance that can really make your day. That is when I saw the trout. The fish looked huge as it cruised back and forth in circles, in the backwater of the pool, on the other side of the current. It was feeding steadily too, and my hearth raced as I tried to figure out how to catch it and not spook it trying. Since the trout was on the other side of the main current, I could not get a proper drift from where I was standing. I had to cross and maneuver myself into a position on the far bank, behind cover so that the fish couldn’t see me while it was looking downstream. The strong winds coming downstream wouldn’t make the situation any easier. I got across and crawled into position on all four, peeking over a small bluff while waiting for my chance. I pulled off the necessary amount of line and checked the leader and knots just to be sure. I observed for a while and took some pictures of the fish feeding. After about 30 minutes I was getting restless and put down the camera. Suddenly the wind died down a bit, before changing direction to upstream. This was my chance, so I went up on my knees and made my cast. The big cicada landed with a plop 2 meters ahead of the fish. The trout reacted immediately and swam over fast, then stopped to think about it for a second or two, before inhaling my fly completely! I set the hook and the fish was on. It ended up in the net some minutes later, a beautiful blue headed brown trout.

I fished my way further upstream but didn’t see any more fish that day. But that didn’t matter, I was happy with the one I had caught. And happy to have passed the first cicada test on my own, after being instructed by master Peter the day before. There were more rivers to explore and more fish to be caught. I proceeded to make plans that would take me far into the remote backcountry rivers higher up in the mountains, hoping for even bigger cicada eating trout. 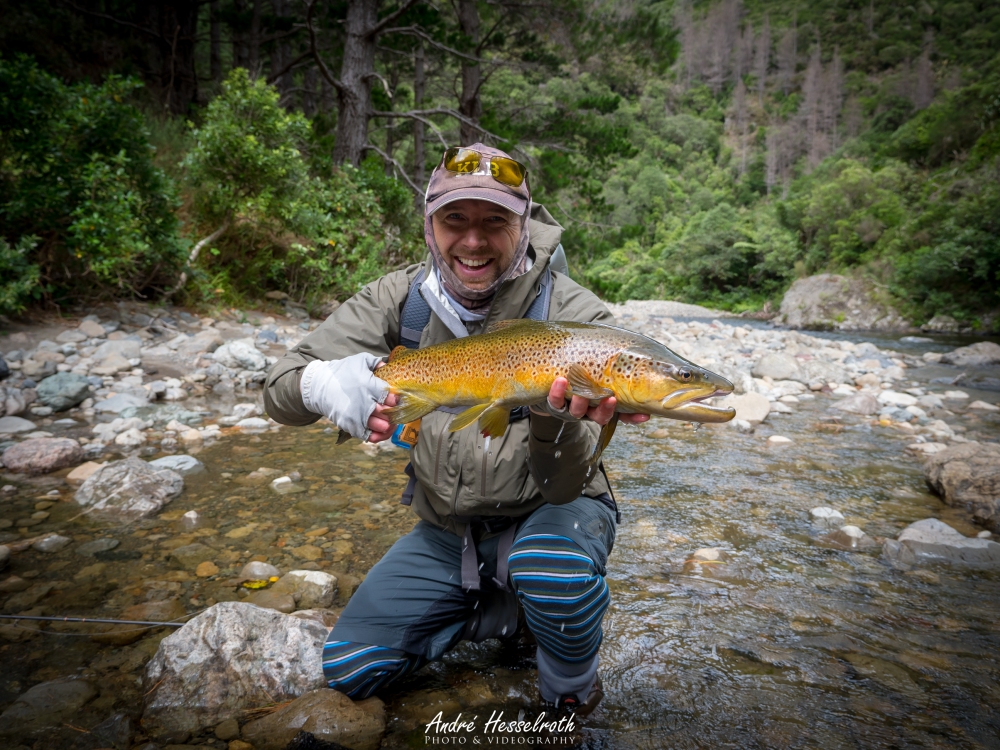 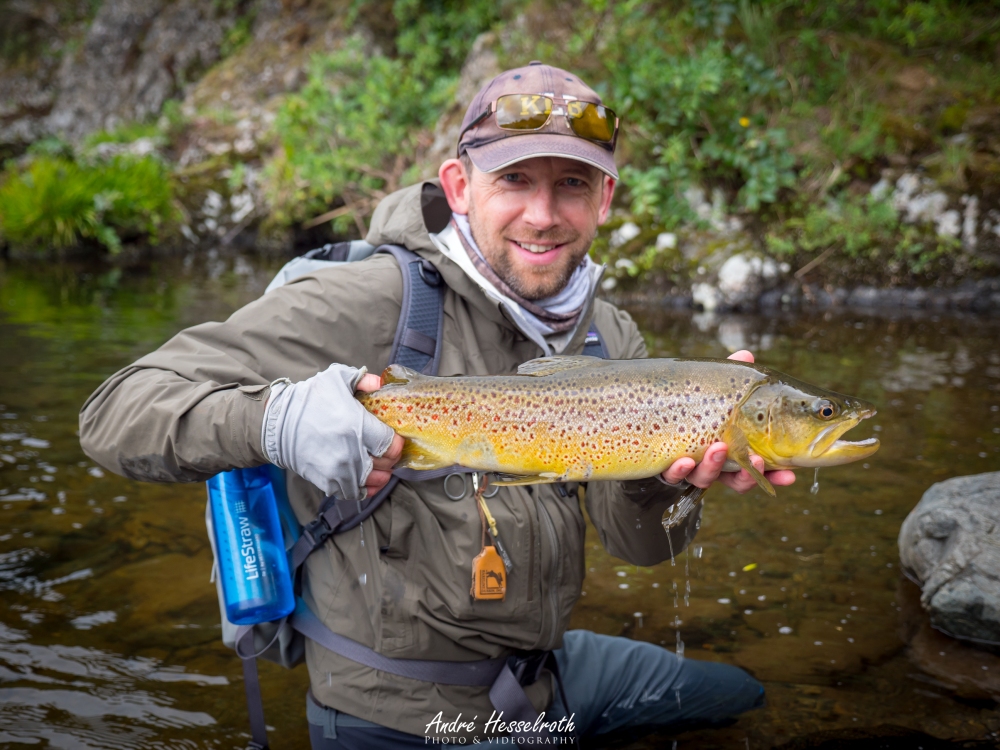 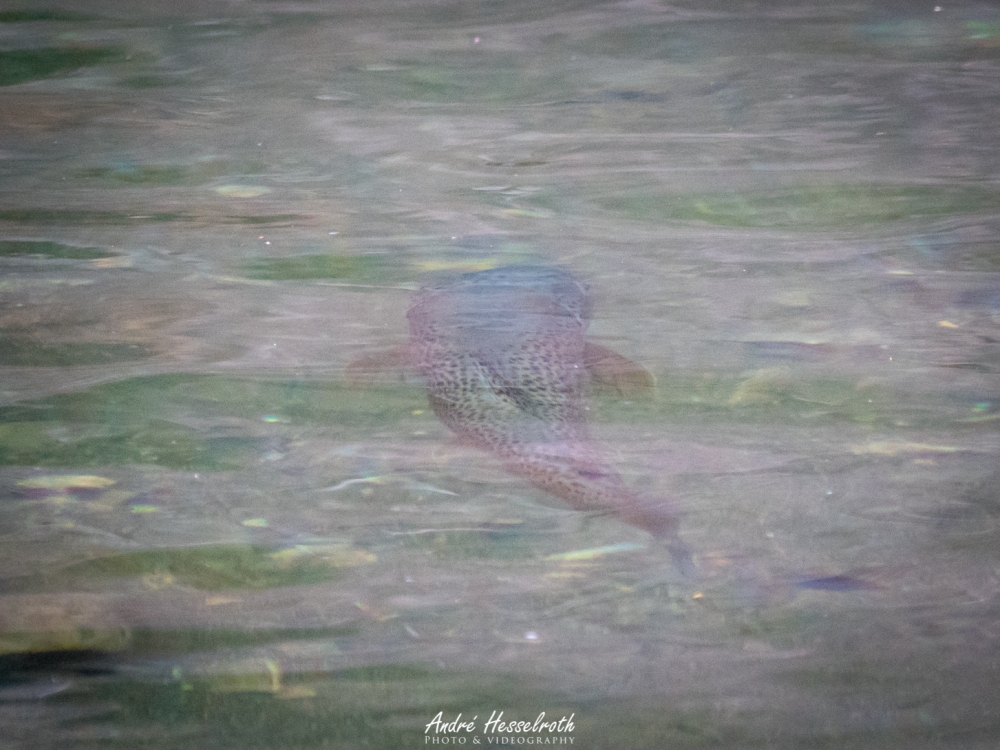 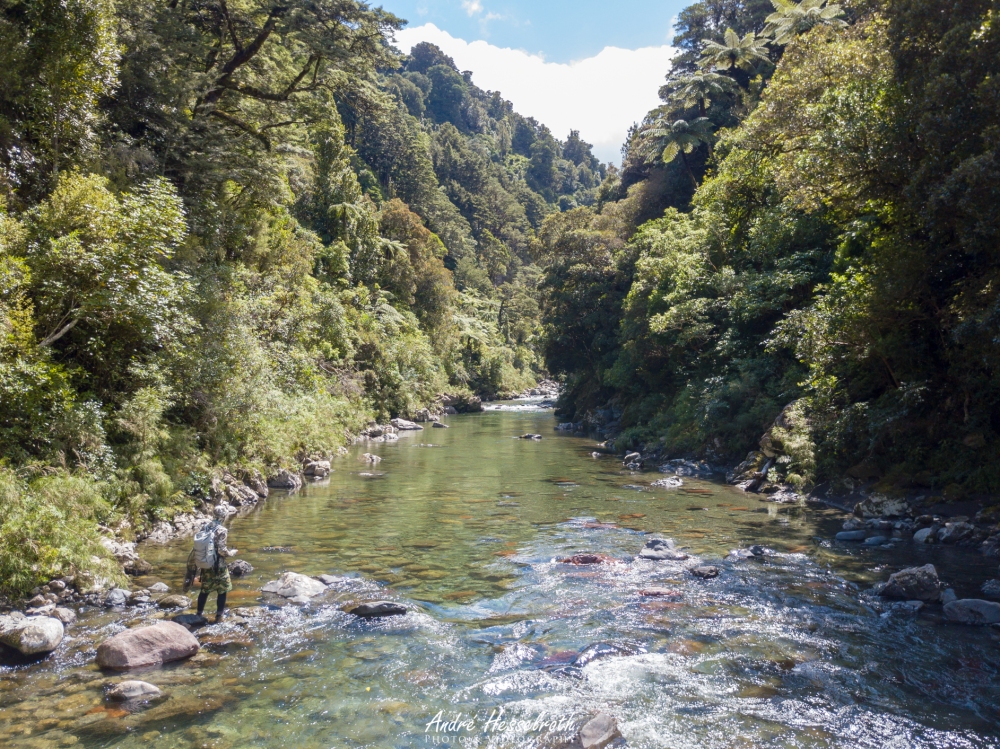