I had been dreaming about the fabled fly fishing paradise of New Zealand for many years and finally the universe aligned itself to make it happen. My epic journey would begin in the salty waters around the northern parts of the north island, before heading south and inland to both lakes and rivers. Winter escapes in my later years have been spent in tropical destinations in pursuit of bonefish, trevallys and other high-octane speedsters. With 7 weeks on the New Zealand islands I would first try to hook myself a kingfish (Seriola lalandi) on the fly. I brought in the heavy equipment in the form of G.Loomis NRX saltwater flyrods in both #8  and #11 paired with Nautilus reels and a big box of saltwater flies to sling around.

While doing research before the trip I spent a lot of time looking at satellite imagery online. I found some interesting looking estuaries and lagoons way up north that I decided to check out. After some hours driving north from Auckland I finally arrived and rigged my gear. The weather was looking promising at first, with blue skies and crystal-clear water. But it did not take long before it all changed and both wind and clouds made it very hard to spot fish on the flats. The water was also very cold so I fished in my waders. During my beach patrols I did see some fish when the light was right, but not any big ones.

On day 2 I decided to wade out to a small island in the middle of the estuary at low tide. I would wait for the tide to rise and hopefully get into some action. I was seeing a lot of stingrays, but there was not any kingfish following them as I had seen in some online videos. When the tide came in the water started to come to life. I was seeing some surface action a bit further out, but it was coming closer to my small island. The current was starting to get real strong with water pushing into the estuary and my little island was right in the middle of it all. Suddenly there was surface action within casting range and I decided to give it a go with a small popper type fly. It did not take long before I hooked up to some kawhai in the 1-2 kilo range, but no kingies so far. At full tide bigger fish was starting to come closer to the rocks and at one time a huge school of big snappers appeared out of nowhere. But they saw me and got spooked. After catching a bunch of kawhai I was taking a break with the popper floating in the water right beside me. I was pondering how to resolve my constipation issues when I suddenly saw a big 20 kilo+ kingfish sitting right next to me in the water looking at my popper fly!  I desperately tried to give the fly some enticing twitches, but the kingfish was not impressed and sway away slowly…. Similar situations ensued over the 3 days I spent there. 1 or 2 single large kingfish would come close to the island at high tide. They had a good look at my fly at several occasions, but it was not to be. As the tide went out the estuary again became wadable and I returned to the mainland.

I decided to abandon the saltwater game for now and head south to catch some trout instead. While packing up I talked to one of the locals and they informed me that I was a little bit early for kingfish this far up north. He advised me to come back in a month or two. Or give it another go further down south… 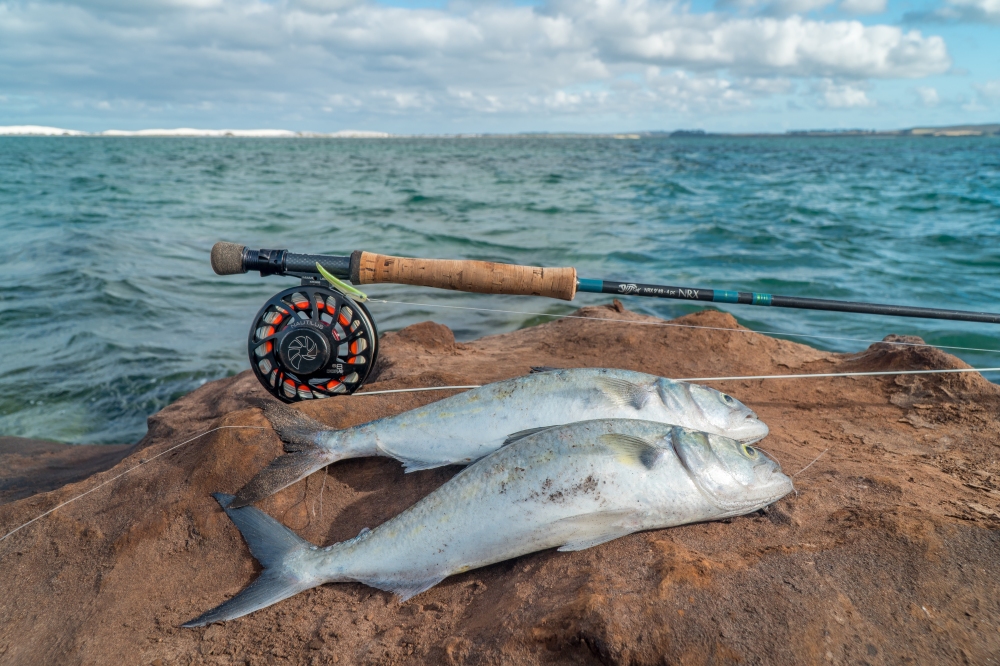