It was early July and summer had arrived in the land of the midnight sun. I had been fishing my way up from Oslo in the south to Finnmark, the northernmost part of Norway, where we share a 196 km border with our Russian friends. The weather was looking nice and according to the reports a stable high-pressure system had settled over the Kola peninsula across the border in Russia. The expectations rose as we crossed the border and headed towards Murmansk. Maybe we would be so lucky to experience some of the legendary first and massive hatches of both mayflies and caddis?

We arrived at our first stretch of river, a wonderful stretch called “Mystic” in the river Litza. Unfortunately the weather had been a bit “too good” with scorching temperatures, resulting in somewhat dazed and inactive trout during daytime. Under these circumstances at least some of the flyslingers concluded that chilling out with some cold beers was the optimal activity during daytime. I had a slight panic attack as I woke up gasping for air in my tent one morning. I made my escape and was immediately attacked by swarms of giant mosquitoes and flesh eating horseflies. I grabbed a six-pack of beer and jumped in the river where I would spend the rest of the day trying to avoid a heatstroke. But as the sun made its way to the lower parts of the horizon the temperatures started to drop and the river came to life again.

I mostly fished together with my friend and fly fishing mentor Monrad. It was Monrad that had invited me into the magic world of dry fly fishing about 10 years ago and had taught me so much. We had both visited Mystic before and knew where to find the fish. And so we did, but the fishing was really slow for us. I caught some smaller fish around 1,5 kg and at least avoided that dreaded feeling of getting skunked. But poor Monrad had yet to catch a fish and it was starting to get to him. It’s the most terrible thing in the world to not catch fish, especially when your mates are. After 3 days of fishing it was time to move on to the next location, a stretch called “Oset” in the river Kharlovka. 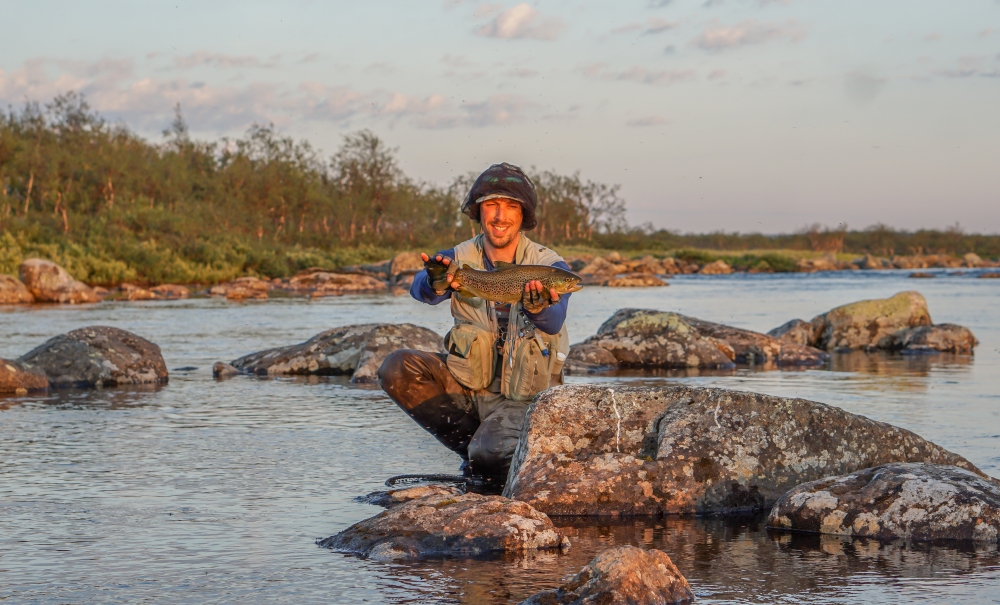