After arriving at Los Roques we quickly rigged our gear and headed out with our guide. He took us south towards one of the 350 small islands in the archipelago. When closing with the island we immediately spotted a school of tunas. Still wearing the life vest I started flyslinging towards the fish. It did not take long before several of them went after my fly and one of them hooked on. 2 weeks of excellent fly fishing in Venezuela had officially begun. 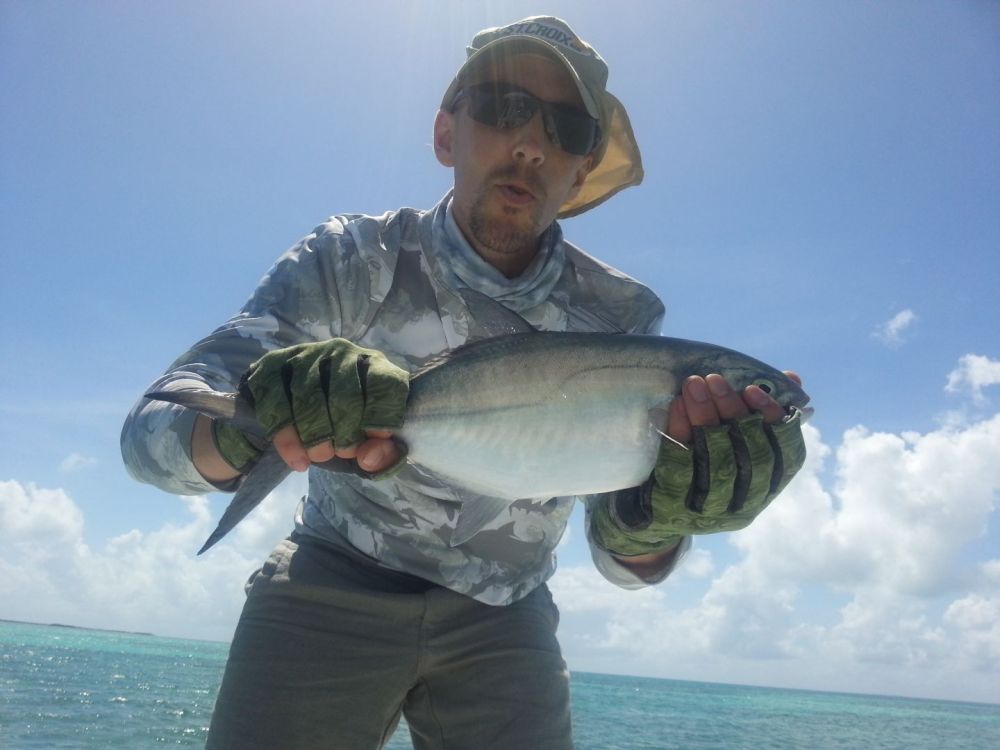 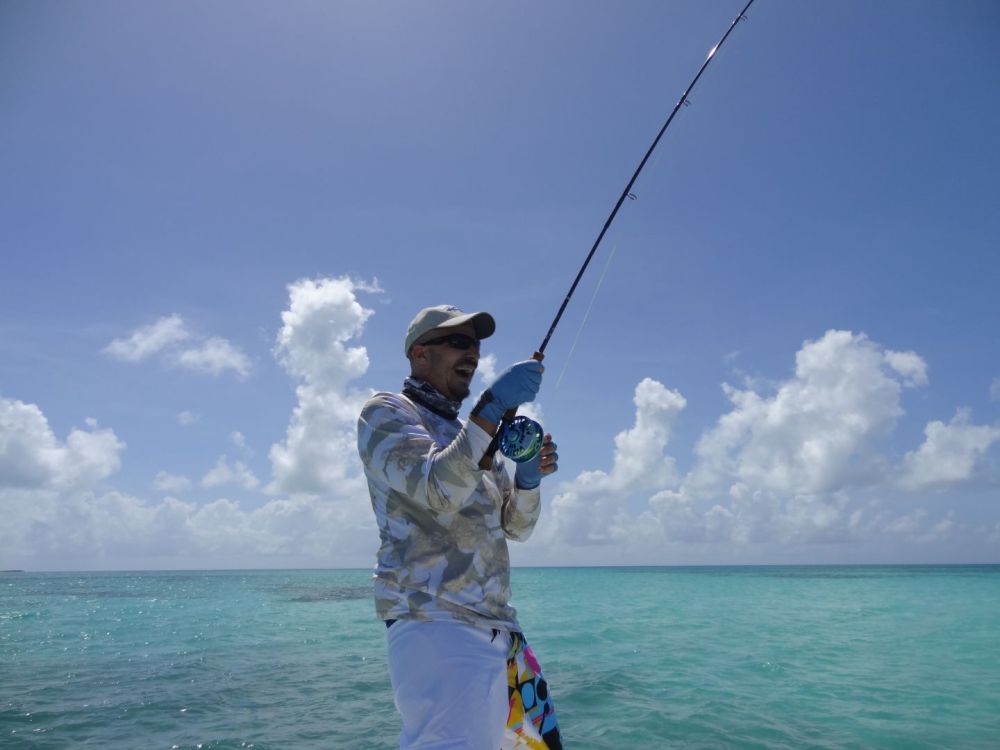 Ole also caught one before we decided to go hunting for bonefish.

The boat driver took us closer to the small island and we disembarked. One of us was to go with the guide along the beach while was left to his own and had to stay back. The bonefish here feed on small minnows that exist in huge numbers near the beaches. A very popular fly they use in Los Roques is called the Gummy Minnow. It’s a bit strange to call it a fly, but it is certainly a good imitation of the resident minnows. We started walking up the beach and it did not take long before Heffren pointed ahead and called out “Bonefish 15 feet!”. Bonefish, where? I did not see anything and slinged my fly in all the wrong places. “He go away” was also something I would hear a lot from our guide Heffren. This happened a couple of more times without me even seeing the fish. But suddenly I saw one very close to the shore and made my cast. “Strip, strip, hold! Strip…You got him!”. And I certainly did. The bonefish raced away at an incredible speed taking all the fly line and some backing with him. He did this a couple of times before giving up. I had caught my first bonefish and it would not be the last one! 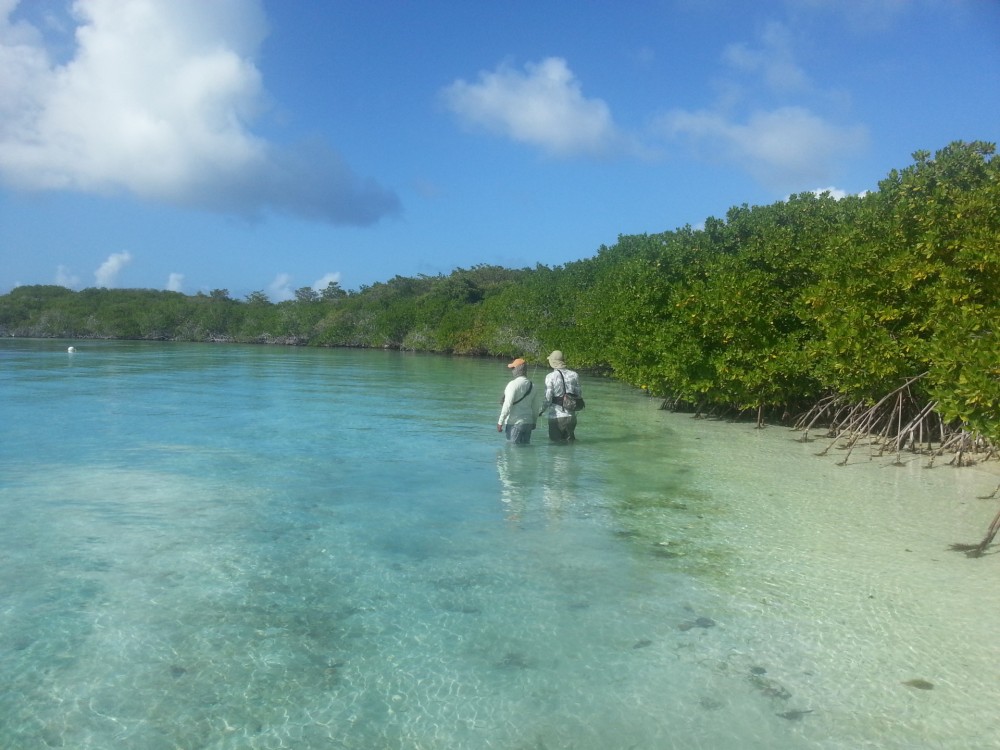 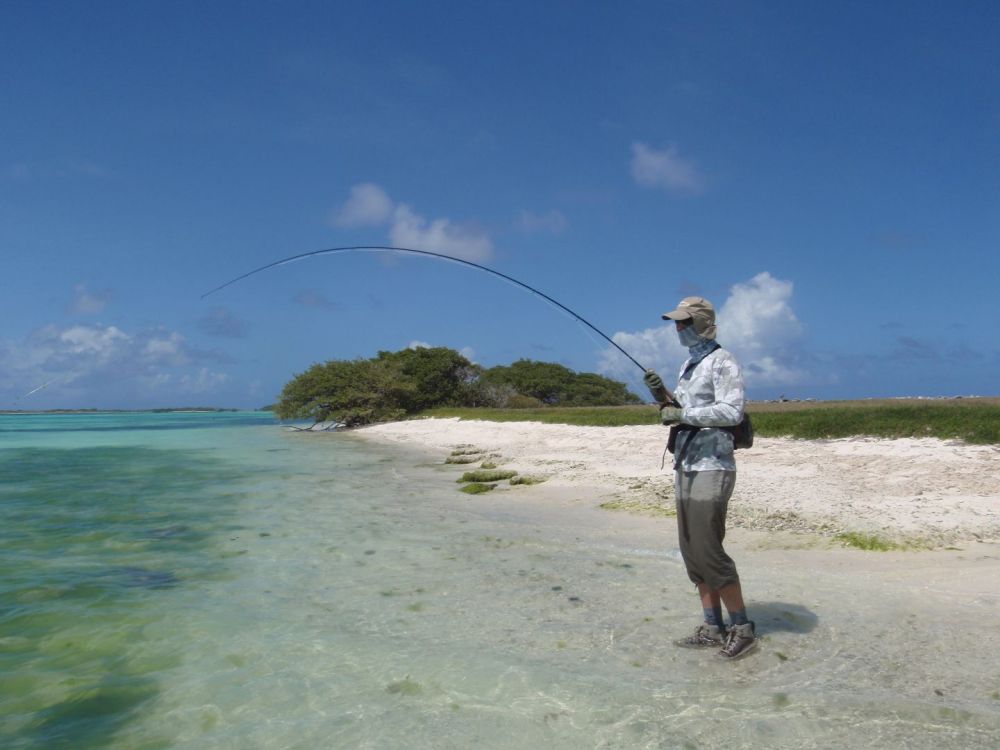 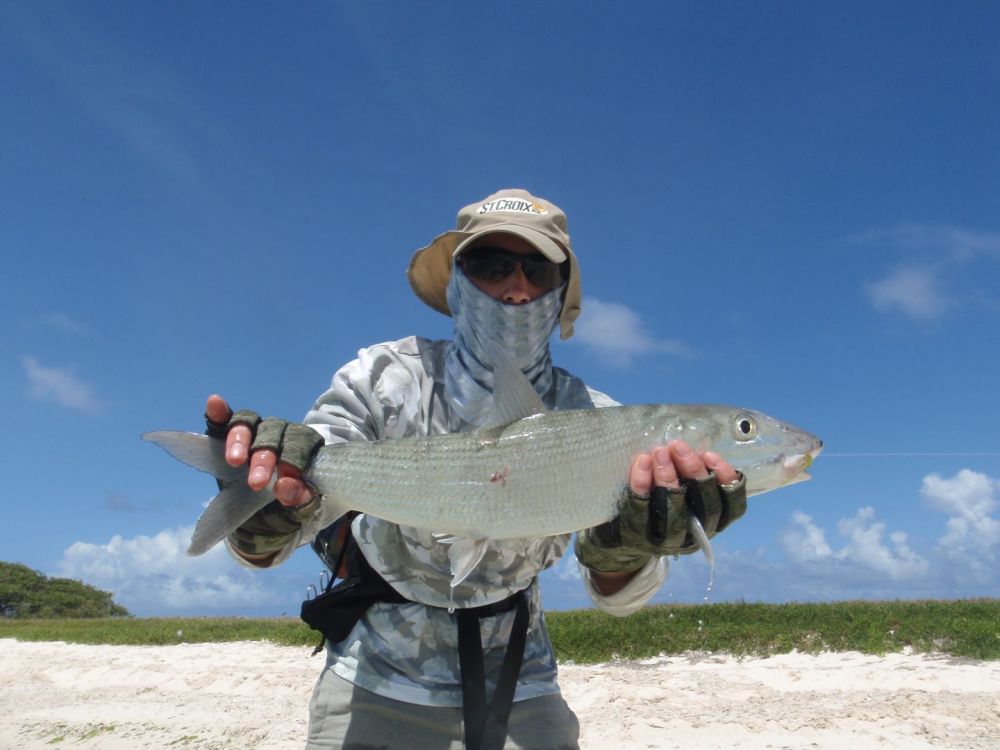 Then it was Ole’s turn to fish with the guide. It did not take long before he also hooked up and caught his first bonefish! 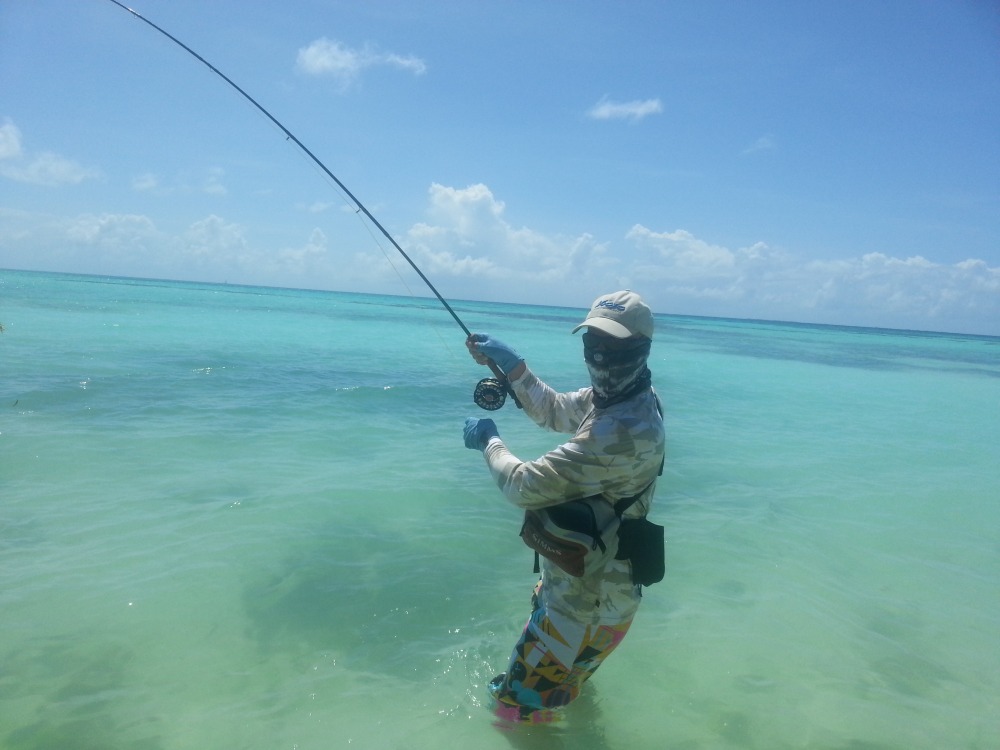 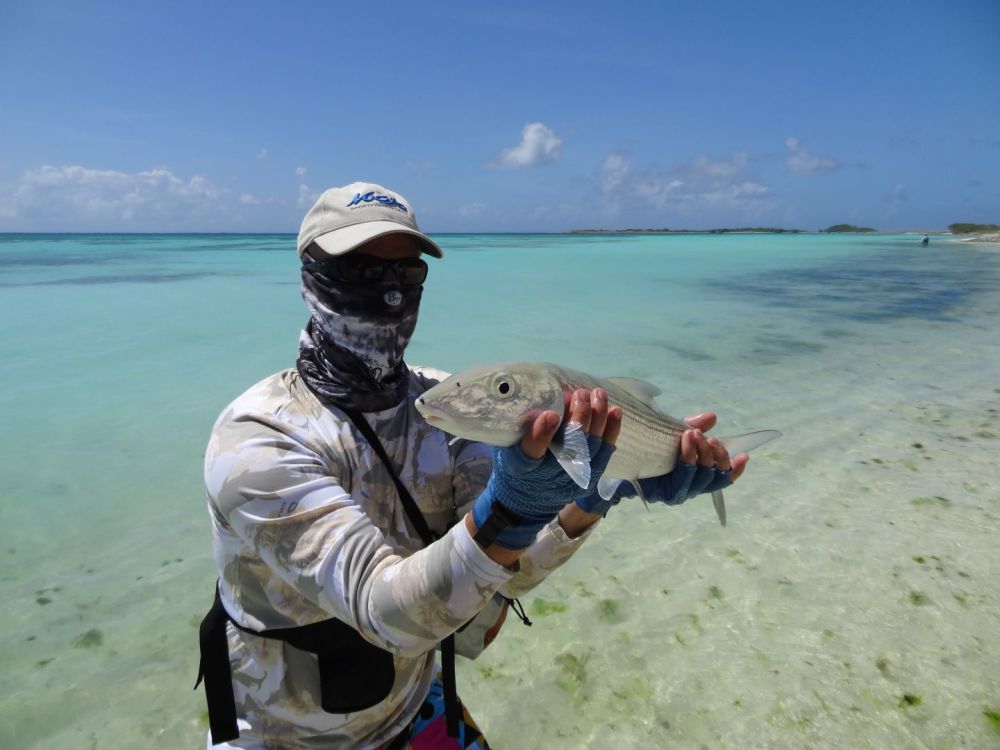 After catching some more bonefish along the beach we moved to another island close by. Our guide said some very big bonefish lived there. We disembarked and Ole headed off with the guide. They waded very slowly in very shallow waters along the beach. I saw a lot of needlefish nearby and had some fun casting at them. They are very difficult to hook properly and they make a mess of a gummy minnow fly. So I stopped that and tried to learn something instead by watching Ole and the guide. From the looks if it the had just spooked a very big bonefish. Then it was my turn again. In the crystal clear waters I could now see some fish now and then. Even some of the bones started to visualise themselves. That’s when I caught a really nice specimen. After taking my fly it raced around the flats and then into the deep water. These fish are great fighters indeed. 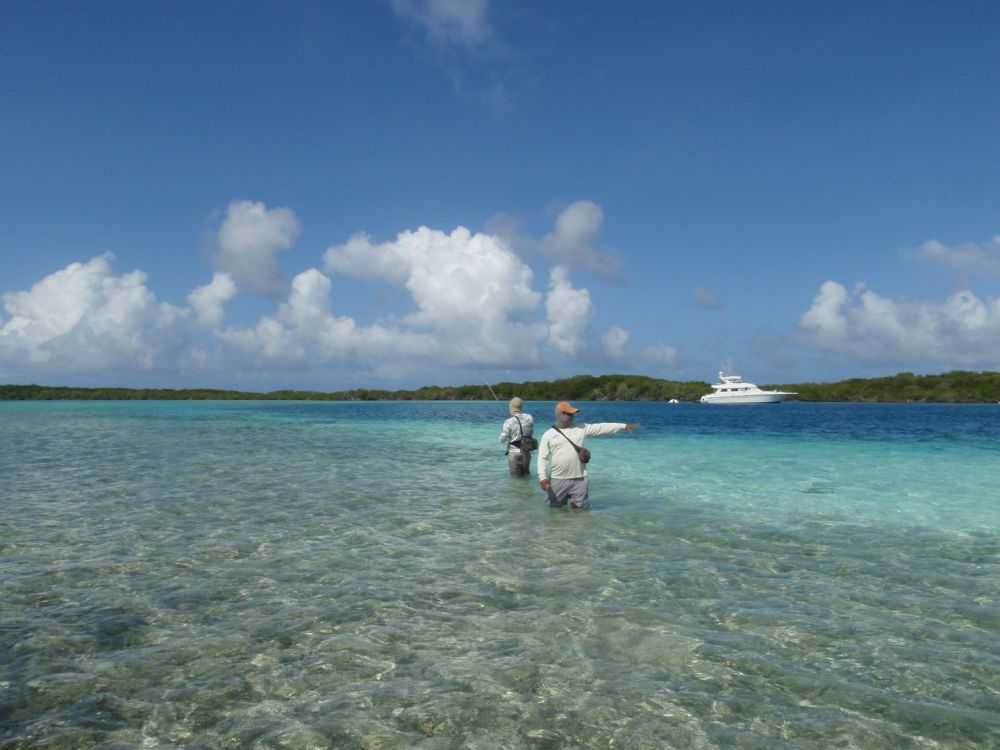 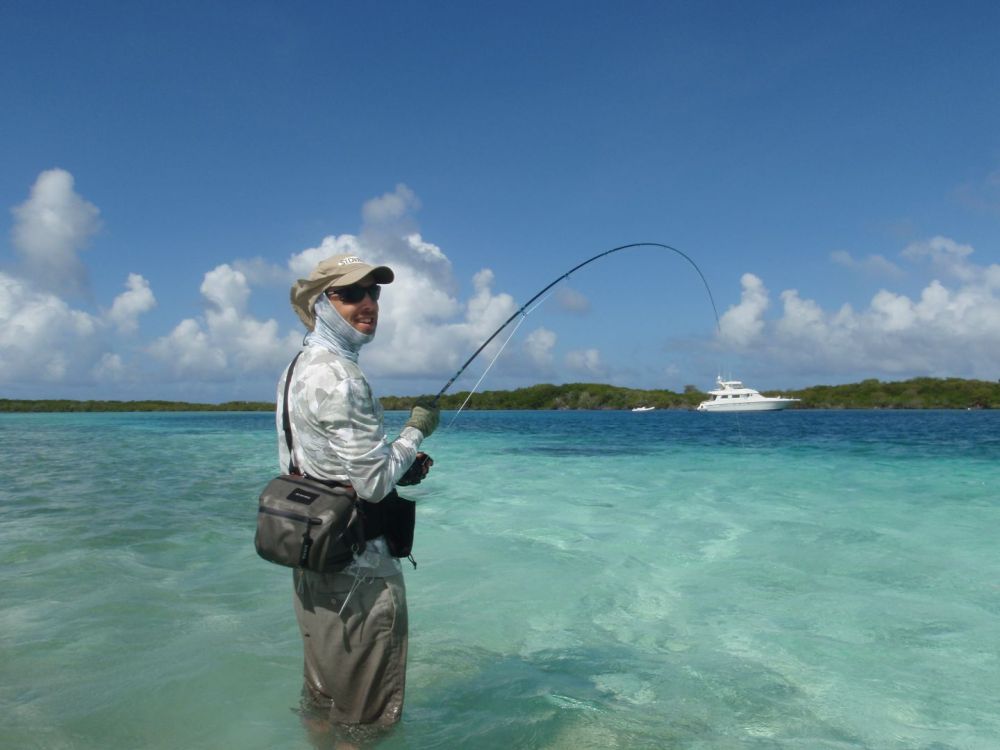 We caught some more bones and even lost a very nice tuna before moving to the next island. It was Ole’s turn again and this time he fished the flats near some mangroves. The guide had spotted a nice bonefish feeding with its tail above water. This is called tailing and is one of the easiest ways to spot bonefish from far away. Ole did great and caught it!

After day one we had caught several nice bonefish and tunas. We did not realize it yet, but we had just gotten hooked on bonefish. The very next day we would be in need of a bonefix.